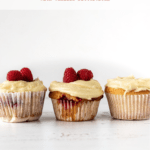 These Raspberries and Orange Cupcakes are the perfect combination of two fruits very characteristic of summer and spring. The vanilla base is very light and fresh with a touch of orange and the heart of raspberry jam is a total surprise. And as if that weren’t enough, the buttercream makes them irresistibly smooth.

I’m not sure if you noticed, but last week I didn’t post a recipe. If you follow me on Instagram, you’ll know I organized my first giveaway. No other than alfajores!!

I can’t say it’s “difficult”, but it requires some work to choose the price, set the rules, reply to all the comments and, on top of everything, baking the gift haha. If you don’t follow me, I suggest you do, as I’m planning on doing more giveaways soon. Very soon 🙂

After the decadent Cakey Dulce de Leche and Cashew Brownies, this week I felt we needed something a bit more fresh with some fruit.

I’ll be brief, so you can focus on these good-looking raspberry and orange cupcakes, which are extremely easy to make. You can even make them into muffins, by ignoring the vanilla buttercream. Of course, you would be missing a fundamental part, but they’ll still be equally delicious.

Why you would love these Raspberries and Orange Cupcakes

How to make these Raspberry and orange cupcakes

If you’ve already made my blueberry muffins, these Raspberries and Orange Cupcakes are very similar. I only adjusted the recipe a bit. The base if super fluffy, spongy and moist, thanks to the cooking cream.

Basically, as with all my recipes, I wanted to bake some yummy and colorful for the weekend. At the supermarket, I saw these gorgeous raspberries on sale. So I bought them and started thinking how to turn them into muffins or cupcakes with a rustic yet elegant touch.

That’s when I came up with the concept of the quick sort of raspberry jam. It not only gives them an intense and fun color, but it also complements perfectly with the orange acidity. They are not fruits I would typically mix, but believe me when I say it’ll surprise you!

How to prepare the raspberry jam

We can agree that this not technically jam. We can also call it “sauce” or whatever you prefer. 🙂

To prepare this raspberry jam, we’ll need a small saucepan, ideally a non-stick one, where we’ll place the raspberries (either fresh or frozen), the fresh orange juice and the sugar.

At medium heat, and using a wooden spoon, let’s stir and break all the raspberries very slowly. You’ll notice they start to release some liquid when they start to heat up and get mixed with the sugar.

Once we notice it has a thicker consistency, it’s done.

Before using, we have to make sure to let it cool completely. So we can easily make it the previous day and keep it in the fridge.

The jam is done. Now to the buttercream.

Buttercream is widely used in American pastries, cakes and sweets. I would dare to say, world wide. In my case, the same as with banana bread, I tried it for the first time when I lived in Ohio. Up to that moment, I hadn’t had the pleasure of tasting this smooth and delicious cream.

There are many types of buttercream (Swiss, French, American, German, Italian), but they all have in common the few required ingredients. Basically, we need to whisk very well butter (at room temperature) and icing, or powdered, sugar. Plus whatever flavor we prefer. For instance, chocolate, peanut butter, dulce de leche or any fruit, such as this strawberry buttercream.

Moreover, we can use it in a wide range of sweet goodies, like cake filling or cupcakes.

This time, I chose the classic American Vanilla Buttercream and I used Chelsea Sweets‘s recipe. Very easy and quick to make. I just reduced the quantities so I didn’t have leftovers.

We can also prepare it a day or two in advance. We just have to pop it into the fridge, in an air-tight container so it doesn’t absorb any weird smells, and take it out 30 minutes before we decide to frost the cupcakes.

So, once we have the raspberry jam and the buttercream, it’s a matter of baking the cupcakes and letting them cool completely before frosting them.

As decoration, we can use fresh raspberries or orange zest.

I really hope you enjoy them with some yummy tea or coffee, or even as breakfast. I won’t tell anyone (or judge). 😀

Don’t forget to leave a comment down below if you try this recipe (and why not, an Uber-style rating? ★★★★★). It not only helps me but also other people that want to try it. You can also tag me on Instagram or Pinterest so I get to check your photos or send them to me privately if you are shy. 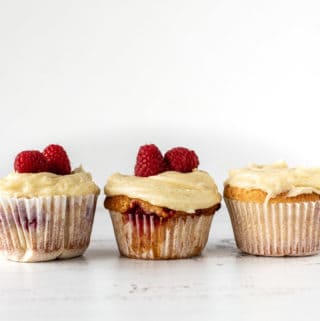 Paula Delapenna
These Raspberries and Orange Cupcakes with Vanilla Buttercream are the perfect combination of spring and summer. The spongy vanilla base offers some freshness thanks to the orange, which is balanced by the sweetness of the raspberry jam.
Print It Pin It
Prep Time 20 mins
Cook Time 20 mins
Total Time 40 mins
Course Cupcakes
Servings 12 cupcakes

Rainy days call for some summer vibes 🍓 Who’

Fall head over heels for these Traditional Alfajo

Upping the brownie game with some fresh berries +

This website uses cookies to improve your experience while you navigate through the website. Out of these cookies, the cookies that are categorized as necessary are stored on your browser as they are essential for the working of basic functionalities of the website. We also use third-party cookies that help us analyze and understand how you use this website. These cookies will be stored in your browser only with your consent. You also have the option to opt-out of these cookies. But opting out of some of these cookies may have an effect on your browsing experience.
Necessary Always Enabled
Necessary cookies are absolutely essential for the website to function properly. This category only includes cookies that ensures basic functionalities and security features of the website. These cookies do not store any personal information.
Non-necessary
Any cookies that may not be particularly necessary for the website to function and is used specifically to collect user personal data via analytics, ads, other embedded contents are termed as non-necessary cookies. It is mandatory to procure user consent prior to running these cookies on your website.
SAVE & ACCEPT
248 shares